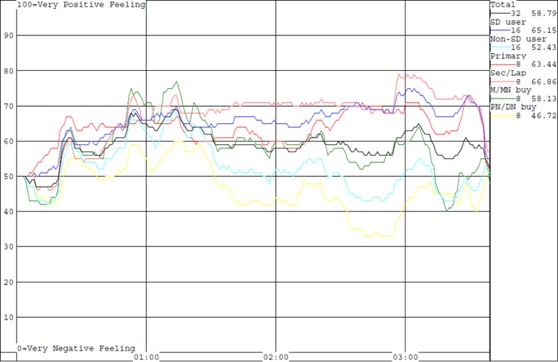 At a recent conference I attended on digital marketing, speaker after speaker drove home the point that successful marketing, especially to millennials, is about content – content that informs, engages, and entertains.  But how do we know if our content is reaching our targeted audience and meets the demands of the UX?

From a quantitative perspective, this is usually done with pre and post testing on the audience to establish awareness, recall, and trial of a given brand or product.  But from a qualitative viewpoint, can we judge the effect of content on a target audience and discuss the effect the content is having on that audience in real time?

The short answer is yes – there is a way to do this and I’ve used it successfully in focus groups to advise clients on content messaging.  This technique relies on a technology called a Perception Analyzer™ and it is often referred to as “dial testing.”

Dial testing is ideal for evaluating content.  Content can be evaluated by participants in the moment as they are watching the content. Participants use a dialer (see photo) and move it back and forth depending on whether they like or do not like something.  Sometimes the content is evaluated as a standalone video meant for distribution over websites (like You Tube) or shown in offices or displays at retail establishments.  Sometimes the content is a TV ad or a series of TV ads.  In this case, the content is often embedded within a TV program and played with other ads.  For example, advertisements can be embedded within a sitcom like “You’re the Worst.”  As participants view the program and the advertisements interspersed within the program, they move the dial to indicate how well they like or dislike what they are viewing – with the midpoint on the dial meaning neutral.

Once the video has been watched, the advertisements can be evaluated for their effect on different segments within the target audience.  For example, women may like a part of the ad while men respond negatively to the same part.  For products that are purchased by businesses and households alike, comparisons can be made between these two types of consumers.  The ads themselves are played for the group and participants are questioned based on their dialed responses to the ads.  In the photo below, you can see on the right hand side a positive response by all segments viewing the content followed by a severe drop-off.  As soon as you have the results of the testing, you can then quiz the participants and find out why they were responding in a negative or positive manner.  Understanding why overall and why by target segment will improve the reception of content among target audiences.

This type of testing is also often referred to as “Moment to Moment” (MtM) testing.  By testing content in this way, researchers can overcome two major biases – flawed recall and memory bias.

Another advantage of the technique is it is scalable.  You could do this evaluation in a series of in-person or online focus groups or web-based communities that are composed of a target audience.  The on-line platform uses an on-screen slider that can be moved by a finger or cursor on the screen (making it compatible with all types of mobile devices).  Once the testing is completed, respondents can be asked about why they responded as they did.  By the way, this kind of testing was used in presidential debates to track real-time viewer responses to candidate answers.  The networks used moderators to quiz focus group participants on why they responded to candidate answers in a positive or negative manner.

I encourage researchers to give this methodology a try.  With content and information driving purchase decisions, making sure that these various forms of stimulus are evaluated in a meaningful manner makes sense.

Donald L. Phipps, CEO and Founder of Applied Marketing Research, has been conducting qualitative and quantitative research for over two decades. Mr. Phipps is a certified focus group director, receiving a professional certificate from the Greeley Institute of Greeley, Colorado and has received advanced training from The Sharp en the Focus Institute of Londonderry, New Hampshire. Mr. Phipps has also completed a number of quantitative research studies in the following areas: attitude and usage, customer segmentation, advertising awareness, choice modeling and product/pricing research studies. He received his undergraduate degree in Journalism magna cum laude from Boston University and his MBA, with marketing and research emphases, from the University of Kansas.